The Secret Diary of Sarah Chamberlain by Sarah Norkus 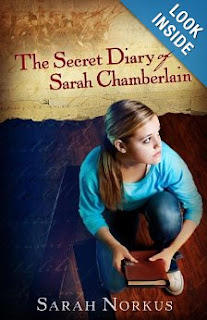 In the year 2008, fifteen year-old Emily Grace (Em) discovers a secret hiding place under a wooden plank in the attic of an old house in Petersburg. It conceals a 150 year-old-diary belonging to Sarah Chamberlain, the previous owner of the house. Carefully turning to the last entry, Em’s interest is piqued by the mention of missing confederate gold and a murder mystery. She slips the diary into the pocket of her capris.

As she reads the diary, Em is touched by Sarah’s deep love for her husband, Robert. Emotionally, Em’s life is spinning out of control and the diary is a welcome distraction. Each day her faith slips further and further away as she blames God for the many trials and tribulations she has had to endure. After rereading the last page and Robert’s senseless murder, she has one more reason to doubt God’s love for his creation.Em slips the diary back in her pocket planning to return it to the attic before helping her mother clean the old house in Petersburg. While scrubbing black scuffmarks off the kitchen floor, Em has an emotional meltdown airing her list of grievances, including Robert’s murder, before God. As she shouts that she doesn’t believe he really exists, vertigo suddenly hits with a vengeance and she passes out. Regaining consciousness, Em is dumbfounded; the kitchen has been replaced by a nineteenth century parlor.

Author Sarah Norkus quickly pulls you into a story about a young girl, Emily Grace, as her life spirals out of control. She despises working at the historical society house with her mother and generally blames God for everything wrong in her life. It seems like the life of a typical teenager except for one thing ~ one day Emily Grace passes out while cleaning up at the historical home of Sarah Chamberlain and wakes up in the same home 150 years in the past. Okay wait, let me stop right there. While the story is entertaining and believable up to now, how on earth did she get into the past? How was she transported into the past? Did she just go there in her mind? Was she in a coma? The author doesn't tell you. All the reader knows is that she fainted and woke up there. That kind of took away the believability for me. I think that she should have said what caused her to be transported there.

Emily Grace's adventures in the past were believable and breath-taking. You could almost see the things that she was seeing from the comfort of your reading chair. What I did not like about the story was the author's choice of dialogue for Moses and Rachael. While I understand that they were freed slaves working for a Caucasian woman in the south, the dialogue used portrays them as stupid with no minds of their own.  Now, I'm sure that the author's portraying them the way that she saw African American people portrayed on the television from that era or may be influenced by the way that she was brought up, I don't know. I just think that it could have been written a little differently and still get the point across. With the exception of those two things, I think that Sarah Norkus did a wonderful job.