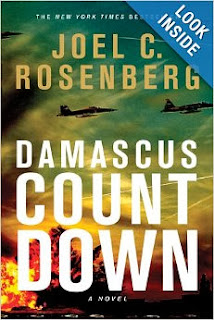 All eyes are on the Middle East. Israel has successfully launched a first strike on Iran, taking out all of their nuclear sites and six of their nuclear warheads—and causing The Twelfth Imam to order a full-scale retaliation. U.S. President William Jackson threatens to support a U.N. Security Council resolution condemning the Jewish State for unprovoked and unwarranted acts of aggression.

Meanwhile, CIA operative David Shirazi has infiltrated the Iranian regime and intercepted information indicating that two Iranian nuclear warheads survived the attack and have been moved to a secure and undisclosed location. In danger not only from the ongoing missile strikes on Iran but also from the increasingly hostile and suspicious governments of multiple countries, David and his team are in a race against time to find the remaining nuclear warheads before disaster strikes.

I received a complimentary copy of this book from Tyndale Publishing for the purpose of review. The review is my honest opinion and I was not paid for this service.

Damascus Countdown continues where The Tehran Initiative left off. Mr. Rosenberg's writing style allows you to pick up and read and still know what is going on without having read any of the previous books. Joel Rosenberg does not shy away from end time prophecy, nor does he back off from prominently displaying the faith of his Christian characters. Damascus Countdown is a captivating thriller that will keep you on the edge of your seat. It is a book that will keep will pull you in from page one and keep you until you turn the very last page. This was a book that I had to read in one sitting as I could not put it down. I love how he takes Biblical prophecy and real events and interweaves it with fiction to create a very believable story. I have enjoyed this series tremendously and am sad that this is the last of the series.