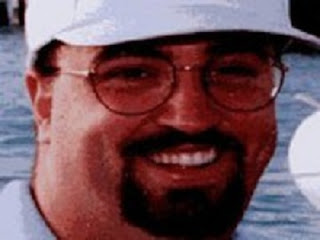 Today I have the pleasure of interviewing author Jim Henry. Hello Jim and welcome to my blog. Please tell us a little about yourself.

I have been writing ever since I learned to read. As a teenager, I dabbled in fiction writing, and as an adult pursued a bachelor's degree in Communications from St. Joseph's College in Maine, and a Master's Degree in Journalism from Southern Illinois University at Carbondale. Antiquity Calais: Standing at Armageddon is the first in a series of novels collectively known as the Universal Life Force Series. I presently teach English Composition and Communications classes online and reside in New England with my family.

Please tell me about your novel. Who or what was your inspiration behind it?

You know the saying "When life hands you lemons, make lemonade?" That's kind of the way I view my first novel, Antiquity Calais: Standing at Armageddon. Writing this book was a key part of my therapy as I recovered from a violent episode about 10 years ago. The villain, Leviathan Avalon, is loosely based on the man who nearly killed me. Being able to confront Avalon was very therapeutic for me.

What are some of your favorite genres to read and to write?

The Universal Life Force Series featuring Antiquity Calais is a scifi/fantasy series, with strong spiritual themes. I am also planning a new series that will be straight scifi once I put the adventures of Antiquity, Gillian, Sherman and Mundoo to bed.

I have gotten a lot of really positive feedback about Antiquity Calais: Standing at Armageddon. Some folks have said it was not their cup of tea, but even if saying so, they did say that it was not an overly preachy book, which was important to me. Regardless of the feedback I have gotten, I plan to write all the books in the series, because it is more important for me to finish what I started than to achieve critical acclaim. That said, I do love positive reviews, but I do not allow the reviews to let my head swell too much!

What do you do when you are not writing? Do you pick up some from your to be read pile?

I love reading to my children, so a lot of the reading I do tends to revolve around their interests. Presently I am reading the Harry Potter series to my 9 year-old daughter. She only recently became interested in those books, but I had previously read all of these books to my oldest son when he was a little younger than her. In fact, I wrote Armageddon while we were waiting for Rowling to publish the Deathly Hallows. I gave him the first draft of the book for his eighth birthday. He just turned 14, so this book has been a part of my life for quite a long time!

When you walk into a book store, where do you head to first? Why?

To be honest, these days I am buying most of my books online, but in the "good ol' days" when I would go into a book store, I would have a book in mind that I intended to buy. Sometimes it would be a book to read to my son, sometimes it might be a reference book I need for my job as a teacher.

I have not quit my day job, nor do I expect I would want to do so. I teach English Composition, Journalism, and Communications courses online, and I love it! So for me, whether I am writing myself or teaching others how to write more professionally, it all rolls into one.

What is your favorite junk food vice?
A fully loaded pizza from Hungry Howies.

Did you have any teacher in school that encouraged you to write? Did you take his or her advice?

I am so glad you asked! My mentor in high school was a profoundly tough, feisty English teacher named Dick Russo. At times in my life, he was the bane of my existence, as he marked up my essays with so much red ink they looked like a Christmas Tree! As tough as he was, Dick changed my life, challenged me to be the best I could be, and though I try not to be quite as feisty with my students as he was with us, no one has had a greater influence over me as a writer and teacher than Dick Russo from Greenfield (Mass.) High School.

I am dedicating one book to each of my children, step children, grandchildren, and if I write enough, my God Children (I have two). They are all my inspiration!

There are so many. Of the names folks would recognize, Rowling would have to be one. Richard Bach, who wrote a lot of books about flight, was one of my early inspirations. I just love Jonathan Livingston Seagull (and have a copy of it in my living room, in fact!) I have also been blessed to meet many talented independent authors, including Virginia Lori Jennings, Bruce Goldwell, Stuart West, Sinead MacDughlas, Rue Volley, Dianne Gardner, Ruthie Derby, Victoria Adams, just to name a few. There are so many of them that I hope I have not offended anyone by leaving them off the list. I have been blessed to meet many great people, particularly through Facebook and the Where Writers & Authors Meet page. 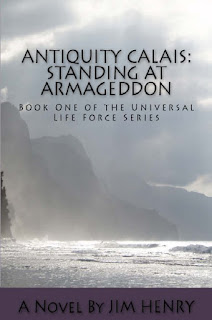 Antiquity Calais is the Creator's Liberator. Leviathan Avalon is Satan's most prolific Destroyer. Avalon has learned how to control the Universal Life Force and use it as his most potent form of destruction. He conjures the most powerful tsunami in the history of history, wiping out life along the Atlantic Ocean in the United States. Every coastal city from Portland, Maine to Key West, Florida is underwater. He believes he has committed the perfect crime, but there is a catch. Antiquity Calais is a psychic writer, and he has a vision of the attack as it unfolds, and before long Antiquity is hot on Avalon's tail, traveling through multiple universes, to the lowest depths of hell, until he and his friends Gillian Usha, Sherman Yazu and the Mighty Mundoo Asquith are all Standing at Armageddon.

Jim Henry began writing this book while he and his son Tyler were anxiously awaiting the release of J.K. Rowling's final Harry Potter book. Every night at bedtime, Jim would read a chapter or two of whichever book they were reading, and Harry Potter was Tyler's favorite. Although Antiquity Calais stands on his own two feet, with a unique story line that involves classic science fiction and fantasy elements, with connections to the Biblical Book of Revelations as well. The Universal Life Force Series is a classic tale of Good vs. Evil that parents can feel safe to read to their young children at bed time.