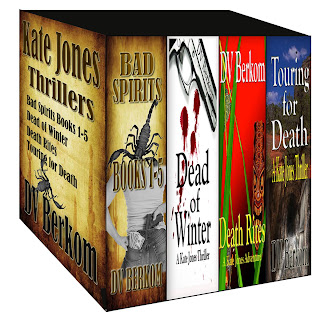 "...It's fast-paced from the get go and the action continues through to the end. This is how I like my books!"

BAD SPIRITS (Books 1-5): Kate Jones is on the run with a backpack full of money, intent on finding her way back to the United States from Mexico. Unfortunately, a ruthless drug lord named Salazar is just as intent on finding her, retrieving his stolen money, and making her pay for ever having left him. Is there anyone she can trust?

DEAD OF WINTER: Kate Jones is hiding out in small town Alaska when she witnesses an execution-style murder. Convinced the killers are Salazar's men and desperate to stop them from finding her, she reports the crime to local law enforcement, hoping to put them off her trail so she can escape.

DEATH RITES: When Kate has to leave Alaska (and Sam) behind, she runs to the last place she remembers feeling safe: the North Shore of Oahu. Against her better judgment, she re-establishes old connections, and soon faces a new problem in Alek, a gifted carver and avid surfer.

Then a brutal murder and theft of a priceless artifact from a museum is discovered, and Kate's thrown into the middle of what appears to be a violent ancient sect come to life. Her only chance of survival is to rely on her wits...

...and the ancient gods of Hawaii.

TOURING FOR DEATH: Kate Jones is hiding out from her shady past driving jeep tours through the rugged high desert of northern Arizona, determined to stop looking over her shoulder and find peace from her mistake of a gun-toting, former life. Testifying against a Mexican drug lord and a dirty DEA agent didn't turn out to be a life enhancing choice and she's been on the move ever since.

Now, five years have passed with no sign of trouble and Kate's finally starting to believe she's safe. Her current goal is to make enough money so she can get lost in the tropics when the tourist trade dies off. Unfortunately, it's the tourists that are dying off and she may be next.

I received a complimentary copy of this book from the author for the purpose of review. The review was my honest opinion and I was not paid for this service.

This book consists of four novellas about heroine Kate Jones, who is constantly making poor choices that get her into some sticky situations. The author does a wonderful job bringing the characters to life. It was really easy to picture what was going on in the story. The author does a fairly decent job of keeping your attention and keeping you on the edge of your seat. The story in itself was enjoyable. However, what I did not like about the book was just when the story is getting really good the author rushes to bring it to a close leaving the reader wondering what just happened?  The author jumps from a smooth story to an abrupt end; almost as though part of the story is missing. (no information to show you how they got to this point before it just quits.) The end of each novella was so disappointing.

DV Berkom grew up in the Midwest, received her BA in Political Science from the University of Minnesota, and promptly moved to Mexico to live on a sailboat. Several years and at least a dozen moves later, she now resides outside of Seattle, Washington with her sweetheart Mark, an ex-chef-turned-contractor, and writes whenever she gets a chance. You're welcome to email her at dvb@dvberkom.com or chat with her on Facebook- she loves to hear from readers as well as other writers.


Enter to win one of 7 ebook copies of Cruising for Death or Serial Death by DV Berkom. Winner will be given the choice of which ebook they would like.


a Rafflecopter giveaway
Posted by Author Pam Funke at 10:21 PM