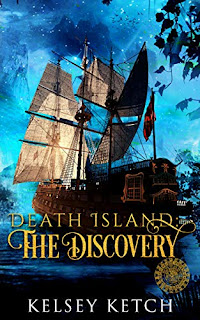 After arriving at Death Island, Meriden Cummings became haunted by dreams of a young Mayan woman’s death. A death, Meriden fears, foreshadows her own. And she soon discovers that in this tropical paradise, there are many ways to die. On top of that, the pirates after her great-grandfather’s treasure are not far behind. Can she and her crew stay one step ahead of them and the Mayan god that inhabits the island?

Meriden is not the only one haunted by the young Mayan woman’s death. Gregory Wilson has had similar dreams the moment he stepped foot on the island. In addition, he has seen the Mayan god of death, Ah Puch. Will he be able to protect Meriden from the earthly dangers as well as the supernatural forces seeking her demise?
This is a new author to me and I must say I'm impressed! This pirate story was amazing. I loved how the author drew me into the story and then never let me go. This is definitely NOT a Pirates of the Caribbean type of story though I did picture the pirates off Jack Sparrow's ship during the pirate attack. Sorry, I couldn't help myself. I must warn you though for there is a little profanity in the book but it was to add to the character of the pirates. So, if you're like me just skip over the word(s) and keep reading, it's a pretty good story. I'm off to read the next book in the series. I definitely recommend this for anyone wanting a good pirate story.
Posted by Author Pam Funke at 4:20 PM