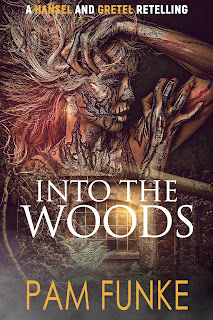 After saving her brother, Hansel, when they were young, from the evil Lucretia Thunderbane, Gretel never thought she would one day have to return to the dreaded wood, Bialowieza Forest.

Oma Leiderhosen warned Awodiya to stay out of the woods behind their quaint German house in Stuttgart, Germany. But like most children, she did the opposite of what she was told. Awodiya knew she shouldn't have followed that kid into the forest but she never knew her Opa's tales were true. Oh how she wished she had listened to her grandmother now. Trapped inside the house of Die Hexe in the center of the forest, Awodiya learns a part of the tale that was never included in Opa's stories. Was it true? Would her mother come to rescue her?
Awŏdíya, is the daughter of a grown Gretel who is now a doctor. Hansel still lives with his mom and dad after Gretel rescued him from the witch when they were teens. Gretel and her daughter are called home when Gretel’s father passes. They decide to honor his wishes to bury him in Germany. While there, the witch has spied them in the house. Gretel took something that belonged to the witch…so now the witch will take something from her in return. Only, that gift is more precious than anyone knows. This book has Christian principles thrown in for a retelling of Hansel and Gretel…and more. ~Review by Evelyn Dotson
Posted by Author Pam Funke at 6:29 PM