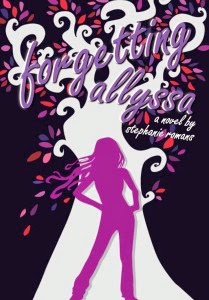 Amnesia. What a Better way to start off senior year of high school?

When seventeen year old Allyssa Bradshaw wakes up from the nap of a lifetime things aren't really adding up. Her face feels like it's gone through the toaster and she doesn't recognize the people standing around her - she doesn't even recognize herself.

Clearly she's woken up on the wrong side of the hospital gurney.

As she recovers from an attack she doesn't remember, Allyssa is thrown into what feels like someone else's life. Despite her lack of memories, she heads off to school determined to start anew. What Allyssa doesn't expect is the backlash of a life she can't remember. The more she learns about Old Allyssa the less she wants to have anything to do with her, making this New Allyssa determined to become someone better.

Forgetting Allyssa is a story of love, loss, and identity - who you were does not mean that's who you are.