The Apocalypse Is Coming! Are You Ready? 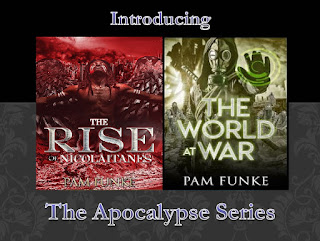 Hello everyone. I don't know about you, but I am really excited about the Apocalypse series being released. During the world's current pandemic and craziness, it's hard to imagine that things are only going to get worse before it gets better. Am I right?

Do you want to know what's coming next? Take a look into this amazing series that touches on the prophecies discussed in the Holy Bible. Granted, I don't know exactly what will happen as only God knows that. This is my idea of what happens during the world's darkest hour.

Though this series may be like the popular Left Behind series by Tim LaHaye and Jerry Jenkins, I believe the storyline is very different. Though I tell part of the story through the eyes of  the evil one, I also follow every day folks who make bad choices but soon find the light. I believe the series is not only entertaining but you, the reader, can learn from it as well. So, I hope that you will go and read the series for yourself. Enjoy!