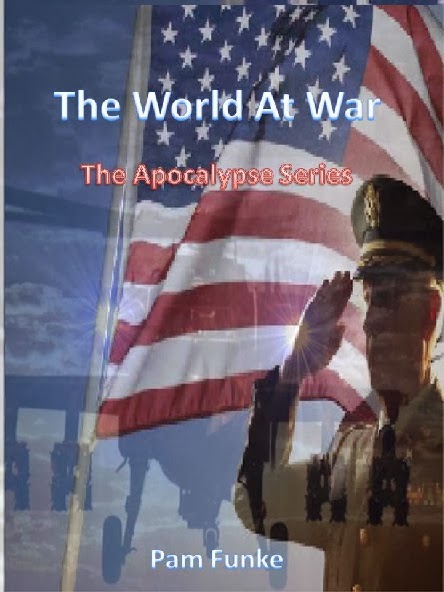 The world is in complete chaos as major nations wage war against each other forcing mankind to take sides. The entire world is watching Nicolaitanes Balac and his continuing rise to global power. Will he be the one to save the world? Is this who we should rely on for help or will this be the worst mistake that mankind has ever made?

I gave this book 4 stars out of a total of 5 stars. There is something about a request for a review on a religious story that can be a little daunting, even enough to cause a second thought. You have to worry about it being weighted so heavily that it becomes offensive to some, you may even worry about your conflicting views making it impossible to give a fair unbiased review. The same can be said for a manuscript that mirrors your reviews giving you the inability to find anything wrong.

Those were all issues I had to think deeply about before, and while, reading The World at War by Pam Funke. Just from reading the back flap it was apparent that she wrote a heavily Christian manuscript, though there was also promise of a strong story on top of a strong spiritual message.

The story begins right at the start of a true apocalyptic scene. It switches quickly between heads of state in different countries, and a few groups of civilians trying to find cover and survive as missiles from each country is launched at another. The intensity over these first few chapters only continues to increase as the counterattacks begin, and the knowledge that things were no all that they seemed, and those behind it, are revealed.

As the world is thrust deeper into chaos the UWR, United World Religion, begins accusing the Christians of a plot to destroy the world by utilizing a new biological weapon, and a weapon that seems to randomly cause people to disappear. That accusation puts the world even more on edge, even though it is the Christians themselves that are 'disappearing'.

Early on there is a particular character that is introduced in a way that gives you the impression he is the key to everything going on. When the world is at the peak of despair he reveals himself and begins performing miracles, specifically healing, just as Jesus did.

There are biblical versus threaded throughout the story, though these really aren't in any way a distraction. Otherwise the story really reads as a general end of the world thriller that really is a good read. There are several pros to this story throughout:

The story, overall, is very well told. It has elements that remind me of the Left Behind series, though it is notably different in its own way.

Funke wrote The World at War in a way that is different from other Revelations inspired stories. The shear amount of distance the story covers is quite an undertaking, and is impressive up until, and including, the end.
The characters, speaking as a whole, are well done and very human. You find yourself rooting the heroes and cursing the villains, or at least those you think are the villains.

There are a few cons to the story as well:

There are a few characters that fall a little short and seem a bit more second thought. In the end The World at War by Pam Funke is a great rendition of the book of Revelations and has an interestingly real feel to it. It is a good read regardless of your religion and one of the most important aspects is there really wasn't any offense to any other religions, something many manuscripts like this fall short on. ~ Zach Tyo