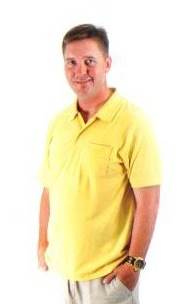 Good evening, Brett. Thank you for taking the time out to interview with me. Please tell us a little about yourself.

Some say that I have writing in my blood. My father made his living as a writer and both his father and his uncle had books published. However, I never followed in their footsteps and instead chose a life of service to my community. I have been doing my best to clean up the streets and make your neighborhoods safe at night for greater than fifteen years now.

Much of my detailed stories stem from things that I have personally witnessed. These inspirations were not copied exactly and were tailored to fit the story and most were not very pleasant.

So how did this cop become an author?

I always felt that I had a story to tell, but never put much belief into my ability. That all changed when I located an app called "The Novelist" in the iTunes Store. The brand new app was created to bring aspiring authors together for a contest. Each week the authors when get an assignments and write a story using a certain number of words. Each week, fans would vote for their favorites and the one with the least would be out. The grand prize was the winner got their book published by the sponsors of the app.

Much to my surprise, I won the thing and now have my debut novel "The Cain Children" published and available for purchase through Amazon.com.


Please tell me about your novel. Who or what was your inspiration behind it?
My novel is titled "The Cain Children" and is about scientists discovering the gene in a human beings
DNA that makes them susceptible to killing for enjoyment. As the book says, not everyone with the
gene turns into a serial killer, but every killer has the gene.

I have often had a curiosity for what makes killers tick, what makes them do it. There are no real
answers, so I thought about what if they were just born that way and the story came from there.

What has been the toughest criticism given to you as an author? What was the biggest compliment? Did those change how or what you did in your next novel?
My debut novel is only a few weeks old and I haven't received any feedback other than from my family.
That is really the hardest part for me, being just another unread book author. If I got bad reviews, at
least I would know what to change and fix for next time, but just being ignored feels like a waste.

I will say that I thoroughly enjoyed the gasps and noises that my wife made as she read through each
chapter of my book. She really liked it, but I guess wives are supposed too.

On a typical weekend, what can we find you doing? Who are you with?
Spending time with my daughters, my wife, my mother, my yard, my grocery store, or our friends. I
don't often find free time anymore and unfortunately writing takes a backseat to life.

What genre are you most looking forward to exploring during your writing career? Why?
I would love to write a children's book. I would to write something that my daughters could actually
read and something that they would enjoy and make them proud of their old man.

Who was your current novel dedicated to? Any particular reason?
My family as a whole, but more specifically my wife for her support, input, critique, and her
unbelievable ability to put up with me.

What are you currently reading?
The David Moody Hater series. I am on the third volume of the three, "Them or Us"

Who are your favorite authors?
Stephen King is the absolute best. I will also occasionally step into the fantasy world with hobbits, or
wizards from Hogwarts.

What authors inspired you to write this particular novel? Why?
I try to copy Kings style, but I often think to myself about whether or not he would enjoy reading what
I wrote. He is so versatile and has written so many different genres and styles.

What 7 words would you use to describe yourself.
Humorous, fun, morbid, motivated, dedicated, loyal, and Merlin

Is there anything else that you would like to share or say to those who will read this interview?
I want people to enjoy what I have to offer. I am certainly not for everyone, but give me a chance
before you decide. I only ask for one thing from my fans, an opportunity.

Which is your favorite character in your book and why?
Mike. He is the good guy in every sense of the word. He saves the girls life, catches the culprit, and then
reads to her while she is in a coma. 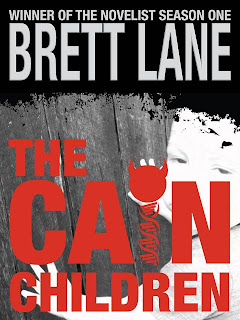 From Brett Lane, the winner of The Novelist: Season One, comes The Cain Children:

Could you take a life? Maybe, but could you kill a child?
What if you knew that the child would grow up to be a monster and there was nothing you could do to stop it... Other than euthanasia. Could you, would you, kill a seemingly innocent person (child) to protect society in the future? Would you detest those that sentence a child to the death penalty before they have even committed a crime?
In the not so distant future, scientists stumbled upon a discovery. They learned to isolate and identify the gene in a child's DNA that makes them susceptible to killing for pleasure, to become a serial murderer. Not every child with the gene kills, but every serial killer has this gene, called the Cain gene after the first murderer in the bible.

There is no cure for the gene and since not every child with the gene kills, a new government agency called the guardians is created. They are instituted to monitor the children born with the genes and to take appropriate actions once the genes manifests itself and they prove to be killers.
Only carriers of this gene can pass it along to their children, so even those that don't kill, can sire children that may.

There is the dilemma, end the outbreak by possibly killing the innocent, or eliminate all carriers to end all possible murder in the future.

Follow this story of the Cain children as well as the scientists that monitor them while posing as their parents.
Posted by Author Pam Funke at 1:45 PM