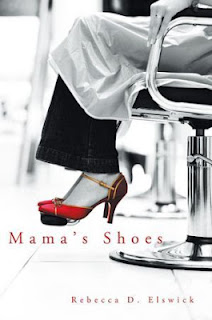 By the time Sylvia Richardson is eighteen, she has buried her parents; given birth to a daughter; and become a widow. It is 1942, and World War II has destroyed Sylvia's dream of dancing in red heels through life to the melody of a Hank Snow record. Instead, she is raising her daughter, Sassy, alone in the coal mining town she vowed to leave behind.

By 1955, thirteen-year-old Sassy has been brought up on a stiff dose of Mama's lessons on how to be a lady--even though Mama drinks, smokes, and dates a myriad of men. But everything changes the day a woman accuses Sylvia of trying to steal her husband, forcing Sassy to come to terms with her Mama's harsh teen years. For Sylvia, only the support of kith and kin can rescue her from her mistakes.

Spanning twenty years, Mama's Shoes is a haunting saga of love, despair, and forgiveness as a cadence of female voices weaves a spell of mountain lore and secrets, defines family as more than blood kin, and proves second chances can bring happiness.

I received a free copy of this story from the author for the purpose of review. The review is my honest opinion and I was not paid for this service.

Mama's Shoes is a charming story about the lives of Sassy, Sylvia and Aunt Hat. It takes place during World War II and deals with the struggles of a young teenaged mother who is widowed by the war. Not only does Sylvia have to deal with raising a child completely on her own but she has to also deal with the loss of her husband. It's hard enough to raise a child on your own but to have to deal with not only the loss of your spouse but then months later to have your suitor also killed would have been hard for any grown woman to deal with. Although Sylvia goes through a rough time of not only having the baby blues and bereavement and temporarily gives Sassy away, she finds the courage and love to obtain her back and does her best to raise her the best that she can on her own.

Rebecca Elswick did a wonderful job with the characters. Reading the story it is easy to picture the characters and to feel what they are going through and how they feel. Sassy is a smart, young lady who feels as though she isn't good enough because she comes from a poor family. Many girls today can easily identify with this character irregardless of what type of family they come from.  Sylvia is a hard-working single-parent that does what she can to raise her child despite never having had anyone to really show her how to do so as her parents died while she was still a teenager. Aunt Hat is an eccentric yet lovable character that everyone can identify with. What family doesn't have someone like Aunt Hat?

Rebecca Elswick's  strong ability to keep your attention throughout the whole book is incredible. This is one of those books that keep you glued to it until you finish. There was never a dull moment in this story.  She has a very descriptive writing style that pulls you into the story as it comes alive around you.

I recommend that you read this charming story when you get a chance. It is filled with tremendous love and commitment of a young woman who despite all that the world throws at her prevails through to the end.You can purchase the book on Amazon

I rate this book with 4 stars out of a total of 5.