Flag of Bones by Elle Pepper 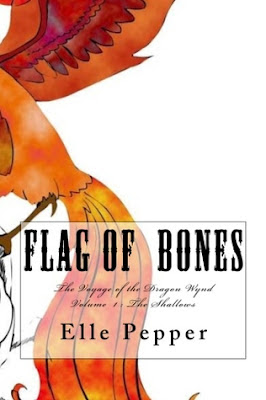 Book Synopsis:
The story, Flag of Bones, started with an idea, well, really two of them.  The first is in a world where gunpowder never existed, what would be different? And the second is what if the Pirates were the good guys?  And so was born the world of Jalen Shenn.

This isn't as much a pirate story so much as a story that recasts the legend of pirates.  The things to remember are, this is not Earth.  It has never been Earth, it never will be Earth.  And they are pirates in the sense that they are against the government.  But they are, in essence Nation-states of their own, held to no law but Jangir's. Jangir, the Lord of the Seas, a harsh taskmaster, always mindful of the balanced scale, that for everything taken something must also be given.  Hundreds of miles from anywhere you have nothing to give but blood, and honor, and life.  And so, that is what the Law and the Code have become.

And one question remains, will ye Aye?  That is, will you sign on?  Will you wager everything and come with Captain Shenn?  Hoist the colors with us and Speak Aye. Brought to Devil's Cove twice to be hung as a Pirate, and twice stolen from the noose by a mysterious benefactor, Captain Jalen Shenn finds himself being ordered to bring a man to the very End of the World, a place even the Pirates fear to go.

Now, with no ground to run to, friends and family murdered for association with him, and open water just ahead, Jalen must face the legend he has ignored and denied at every turn. And he must choose, here, with his wife's people the horrific Spira, to either stand in defiance under the black flag, or give in, draw to and prepare to be brought back in chains, abandoning not only the quest to the End of the World, but also the quest for the fate of his wife and daughter, taken by the Empire to keep him in line. With nothing left to lose, and dishonor heaped upon indignity, Jalen must finally make his choice.

I received a free copy of this story from the author for the purpose of review. The review is my honest opinion and I was not paid for this service.

Flag of Bones is a well-written exciting pirate story. I thoroughly enjoyed the book although I was a little confused at times. One thing that I would suggest to the author is that not everyone who is reading the story is a sailor or familiar with pirate slang. Therefore some of the words that are  used in the story should have been explained and not left the reader guessing as to what it meant. But all in all the author did a good job keeping the attention of the audience. I'm looking forward to seeing what this author comes up with next.

You can purchase the book on Amazon. I know that you will thoroughly enjoy the book if you like a good pirate story!

I rate this book with 4 stars out of a total of 5.