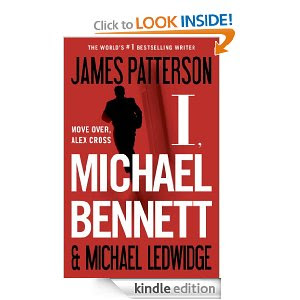 To escape the chaos, Bennett takes his ten kids and their beautiful nanny, Mary Catherine, on a much-needed vacation to his family's cabin near Newburgh, New York. But instead of the calm and happy town he remembers from growing up, they step into a nightmare worse than they could have ever imagined. Newburgh is an inferno of warring gangs, and there's little the police-or Bennett-can do to keep the children safe.

As violence overwhelms the state, Bennett is torn between protecting his hometown and saving New York City. A partner in his investigations, federal prosecutor Tara McLellan, brings him new weapons for the battle-and an attraction that endangers his relationship with Mary Catherine. A no-holds-barred, pedal-to-the-floor, action-packed novel, I, Michael Bennett is James Patterson at his most personal and most thrilling best.

The review is my honest opinion and I was not paid for this service.

Once again James Patterson did not disappoint. He draws the reader in for an edge of your seat thriller that you cannot put down. While I am disappointed that the author ended the book the way that he did, it does however end with a massive cliff-hanger that will carry the reader to reading the next Michael Bennett book. I look forward towards reading the next book in this series to find out what happens next.