The Dragon Shield by Dianne Gardner 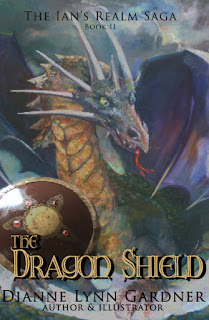 Book 2 in the Ian's Realm Series, The Dragon Shield is a middle grade and young adult, adventure fantasy. Now a young man, Ian returns to the Realm to fight against the tyranny that has befallen his friends. But the Realm is a different place, the forest is dying, the Kaemperns have lost the shield that protected them from the dragon, and Ian has a hard time proving his allegiance when trouble follows him through the portal. His struggle to do right buries him in confusion, and he must fight his own will to prove his integrity. The Ian's Realm series is filled with sorcery, wizards, magic, and adventure.

Although, I wasn't quite sure what exactly was going on in the beginning, I was soon drawn into the story. It's a wonderful cross between Lord of the Rings and Harry Potter. I liked the little no name being in the Realm, he has a lot of Dobby characteristics. He was a very unique character that could only come from a great imagination.  Ian on the other hand, reminds me of a young Harry Potter. He's very charismatic. He's on a quest to find out what happened to his father in a world that's not of this earth.

Dianne's wonderfully descriptive writing style will have you so involved in the story that in a sense you will have forgotten that it was just a story. This is one of those books that you just can't seem to put down until you've turned the very last page. The book is very well written and enjoyable and I'm looking forward towards reading the entire series.

I recommend this book to anyone who loves to read great books! This is one that you will definitely enjoy. 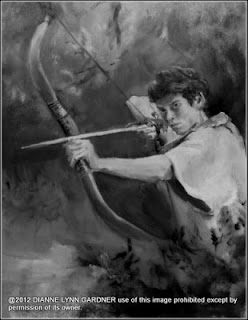 I give this book 5 stars out of 5 stars.

Dianne Gardner is both an author and illustrator living the Pacific Northwest, Olalla Washington. She’s an active member of the Society of Children’s Book Writers and Illustrators, and the National League of American Pen Women. She has written Young Adult Fantasy novels as well as articles for national magazines and newspapers and she is an award-winning artist.

Dianne spent many years living out in the desert wilderness of the American Southwest, lived in a hogan made from adobe and cedar for thirteen years, co-owned 25 horses both pure bred and Native American ponies, traveled horseback and by wagon throughout the Navajo reservation, herded sheep and goat, worked in the forest planting trees and piling, farmed on barren soil and even lived in a teepee for a short while. She spent many long years using survival skills as a way of life.

Later she studied pastoral counseling and was a Pastor’s apprentice at a mainline church. She and her husband have been feeding the homeless for over twelve years. Today she shares both her survival experiences and her love for people, especially young people, into her writing as a way to not only to give her readers a firm understanding of her stories’ characters, but a rich appreciation of nature.