10 Days To Love By Michele Richard 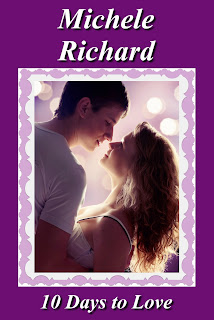 Richie Graham and Danielle ‘Dani’ MacDonald have been best friends for four years. Now that the time has come to leave Old Orchard Beach for college, the countdown begins to say goodbye. The race to close down her family’s motel for the season and for their hearts begins. With ten days left, will they see what’s always been right in front of them? Or is there too much left unsaid?

Scrambling from the warm, soft bed, Dani headed to the window overlooking the backyard. She caught sight of Richie turning to make another pass below her. There was a certain beauty to the way he looked when he was shirtless and a slight sweat covered his tanned, tattooed skin. She once asked him what the poem etched on his left shoulder meant. Richie never answered. His wrestler physique showed all the years of training he’d done to keep in tiptop shape. The gel in his brown, short, wavy hair glistened in the sunshine.

A sigh slipped past her lips at the realization their time was coming to an end. Unlike every other year, the end of summer this year marked both their leaving. In less than two weeks, they’d both be headed off to college. While Richie would be staying in Maine to go to the University of New England in Biddeford, Dani was headed to Boston University in Massachusetts. It wasn’t just the end of their time. The rest of their group of friends would also be splintering off, some to other schools, some staying home. They all worked at the motel in one form or another.

Richie looked up, smiling. The way he opened a water bottle and wrapped his lips around it had Dani swooning. Her body flushed at the sight. He shut off the machine and pulled out his phone. Dani giggled when her phone went off seconds later. She grabbed her cell off the table and returned to the window as she read the text.

The ten day countdown begins tonight at my house. Eight o’clock. Be there!

At the end of every summer they had a set routine. The last days of summer were to | be celebrated as they prepared for the off-season. These last moments would be bittersweet knowing it would be a long time before they’d all be together again next summer.

Michele Richard has created the Mocked by Series as well as the Parasouls series. From Mocked by Destiny to the trilogy Mocked by Faith, she writes what comes from the heart. A wife and the mother of two preteen girls, she spends her days spinning tales of what happens when what you believe in Mocks your every turn.

When she’s not writing, her days are filled with her family, her bunny Geneva, and friends. Her greatest passion is learning new languages and traveling. Surprisingly, she’s not a fan of TV, which means she doesn’t watch it - at all. She lives in the Northeast; however, her family stretches down the east coast as far as North Carolina.
Contact the Author: Blog | Facebook | Twitter | Website | Goodreads
Posted by Author Pam Funke at 4:28 AM