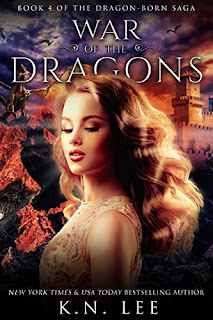 War of the Dragons by K.N. Lee
Purchase the book here: Ebook | Softcover

Dragons. Magic. War. In a mystical world where Dragons reign, one mysterious duo of wizards rise from the shadows to even the battlefield.

New York Times bestselling author, K.N. Lee presents the fourth installment in the fast-paced, thrilling epic fantasy adventure that swept the world away with the #1 international bestseller critics are comparing to Rick Riordan's young adult novels, Half-Blood Dragon.
The lines are set. Wizards versus Dragons, and as queen of Withrae, Rowen finds herself faced with the fate of the kingdom in her hands.

Her crown binds her to the palace, even someone she loves dearly is kidnapped by the Trinity brothers who rule in the southern islands of the human realm. She must find a way to protect her family without abandoning her duties. There's one young man who can help her, the scribe who once worked for her father. Together, they hatch a plan to stop the war, protect both the humans and the Dragons, and prevent the prophecy Rowen has always dreamed would come true.

The end of the world.

As a curse plagues all of Draconia, preventing its people from shifting in their Dragon form, Rowen and Rickard will come face to face with their darkest nightmares, and the truth of the red dragon from Rowen's prophecies will be revealed.

Embark on a magical journey packed with heart-pounding action and a dash of romance that fans compare to George R.R. Martin's Game of Thrones, Sarah J. Maas's Court of Thorns and Roses, and Pirates of the Caribbean.

The dragon-born series is the first thing that I have ever read by author K.N. Lee and I must say that I am impressed. Though I am a late reader of the series, it worked out to my advantage. I did not have to wait and wait for the next installment in the series. So yes, I have read books 1-4 back to back. I do believe War of the Dragons is my favorite book thus far. The subtle love stories entwined with action and adventure creates a marvelous story. I was rooting for several characters while others simply make me dislike them. Only a good story and a good author can accomplish that. War of the Dragons was so exciting I couldn't put it down. Then just when things seemed as though I could stand it no longer, it ended. (frown) Why is it over? Guess I have to wait until the next book comes out.
Posted by Author Pam Funke at 4:44 PM