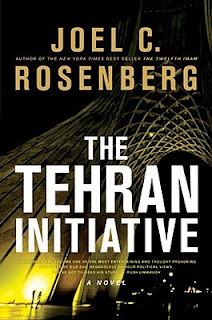 The world is on the brink of disaster and the clock is ticking. Iran has just conducted its first atomic weapons test. Millions of Muslims around the world are convinced their messiah--known as "the Twelfth Imam"--has just arrived on earth. Israeli leaders fear Tehran, under the Twelfth Imam's spell, will soon launch a nuclear attack that could bring about a second holocaust and the annihilation of Israel. The White House fears Jerusalem will strike first, launching a preemptive attack against Iran's nuclear facilities that could cause the entire Middle East to go up in flames, oil prices to skyrocket, and the global economy to collapse. With the stakes high and few viable options left, the president of the United States orders CIA operative David Shirazi and his team to track down and sabotage Iran's nuclear warheads before Iran or Israel can launch a devastating first strike.

This review is my honest opinion and I was not paid for this service.

The Tehran Initiative  was a captivating thriller that will keep you on the edge of your seat. This is one book that I could not put down as I had to know what was going to happen next. Reading this book like others written by Joel C Rosenberg makes you wonder if it is all possible. Many of the events that transpire in the book are also real live events going on in the world today. Although real life does not end in the way that it does in his books, they are very plausible in what could very well transpire one day.

The Tehran Initiative continues where The Twelfth Imam left off. Mr. Rosenberg's writing style allows you to pick up and read and still know what is going on without having read any of the others in the series. I like how Mr. Rosenberg pulls you into the story as though you are really there. His descriptive writing style allows the reader to be able to picture every moment of the story. He has wonderfully developed characters that Mr. Rosenberg allows the reader to fall in love with.Mr. Rosenberg's vast religious knowledge, current event knowledge and cultural knowledge helps to make the story not only enjoyable, but believable.This book will leave you not only thinking, but wanting more.

I give this book 4 stars out of a total of 5 stars.