Ella Font: This is Ella Font with the Inter-Dimensional News Network. I have with me today two police officers. [Looks at notes] Sergeant Edward Osborn of the Las Palomas Police Department and Amaya Ulonya Kiand of the Eshuvani Kiandarai. Good morning to you both.
Ed Osborn: Good morning.
Amaya Ulonya: Grace be unto you and peace from God, the Father of Our Lord.
EF: Wow, that sounds so weird coming from an alien?
AUK: Why is that? Do you think God is a respecter of persons? That he would not include all his created children?
EF: Um, well, I never thought of it that way, actually. [Straightens her notes] So, um, Eshuvani criminals have been plaguing Las Palomas?
SEO: Yes, that’s right, and many of my men have been injured trying to either take them into custody or protect civilians.
EF: So, why haven’t the kiandarai stepped in to help? Aren’t they the Eshuvani equivalent of a police force?
AUK: Police and rescue, yes. Unfortunately, the kiat of Woran Oldue, the police chief of the nearest enclave if you will, does not place a high priority on helping out humans. Fortunately, his superiors do value humanity, and steps are being taken to secure help for Las Palomas.
EF: Can’t you help them, Amaya?
AUK: From Marquette, Michigan? That’s a bit of a commute to the Texas coast, but I’m trying to arrange something. If I can take some personal time off and secure a temporary replacement for myself, I can fly down to Las Palomas and give the officers there a few quick lessons. That might help until a more permanent solution can be enacted.
EF: Sergeant Osborn, you’ve spent considerable time with Amaya. After all, she is your-your, um–
SEO: Urushalon, my adopted relative, yes.
EF: Exactly. Urushalon. Can’t you teach your men what Amaya has taught you?
SEO: Amaya trained me from a very young age. I’ve tried passing on some of that knowledge, but I’m afraid teaching isn’t a skill God gave me. I try, but [cringes] it’s hit or miss. We really need an expert.
AUK: [Glances at Ed] I have it on good authority that help will be on the way soon. Either I’ll find that relief and take my vacation, or the Council of the Kiati will force the local kiat to step in and do something constructive.
SEO: I hope that comes soon. We lost another two men to the injured list yesterday.
AUK: [Grips his hand] As quickly as it can be arranged, urushalon.
SEO: [Covers her hand with his] I know you’re trying to work it out.
EF: So, how did you two meet?
SEO: I got lost in the woods around Marquette when I was on a camping trip with my parents. She found me.
EF: Love at first sight?
AUK: Not the way you mean.
SEO: Amaya is three times my age. I was almost four years old at the time. She’s my adopted mom, not my wife or girlfriend. I’m married to a wonderful lady and have two kids.
EF: Oh! [blushes] I thought urushalon meant “beloved.”
AUK: It does, but that’s not the same kind of love you assumed. My native language has different words for “love” or “loved one” and only a couple mean anything like the sort of physical or emotional attraction you thought it meant.
EF: Then what kind of “love” is urushalon.
AUK: Like many translation issues, it doesn’t cross the language barrier easily, but it describes a type of love that puts the other person’s needs ahead of one’s own. There is also a family connection implied.
SEO: In Eshuvani society, I am considered a close relative of Amaya’s. That gives me privileges to move around the Eshuvani enclaves without escort, although I can expect to be stopped and asked to prove my identity if I encounter kiandarai. I can also act on her behalf if needed.
AUK: With the bulk of my family living on other continents, Ed is also my nearest available relative, even though he is in Texas.
EF: Sort of a “next of kin?”
AUK: In a way, yes. If something were to happen to me, he would be the first notified, and he is authorized to make decisions about my medical care or about final arrangements.
SEO: Nothing is going to happen to you.
AUK: This is a dangerous job we do, and the results are in the hands of God. Nevertheless, I pray you are correct.
EF: By the sounds of things, Sergeant Osborn is the one in the greatest danger just now.
AUK: A fact that weighs on my mind often, but worrying is like herding the wind.
EF: Yes, I suppose it is. Well, we’re out of time for today. Thank you both for visiting.
SEO: Thanks for having us.
EF: This is Ella Font of the Inter-Dimensional News Network. 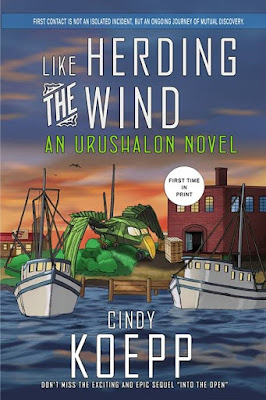 Blurb:
A Mystery. A wounded path. An alien society with centuries of work to coexistent with humans, but someone isn't happy with the progress made. Will the human-alien team find those responsible before another human dies? In the 1600s, an Eshuvani generation ship crash-landed in a farmer's field in Germany. Unable to find the resources on Earth to fix their ship, the Eshuvani built enclaves and tried to let the humans develop without interference. Three hundred fifty years later, Eshuvani criminals start a crime wave in the Texas coastal town of Las Palomas. With police officers being injured and killed in the efforts to stop them, Sergeant Ed Osborn attempts to use his ties to the Eshuvani community to get help for his men, but the local leadership wants nothing to do with humans. Ed contacts his urushalon, Amaya Ulonya, the Eshuvani mother he adopted when he was a boy, and seeks her help. After the death of her partner, Amaya, the captain of a police and rescue team, finds more grief than joy in her current assignment. Amidst controversy, she arranges to spearhead the new Buffer Zone station between Las Palomas and the nearby Eshuvani enclave of Woran Oldue. She hopes the opportunity to help Ed train his people will help her bury the past. The indifference of the local administration leaves her with Ill-functioning equipment and inexperienced staff. It only gets worse when the attacks of an Eshuvani criminal grow personal. Amaya must get control of her grief to help Las Palomas or risk losing someone even more dear to her than her last partner.