Staying: A Multi-Generational Memoir of Rescue and Restoration 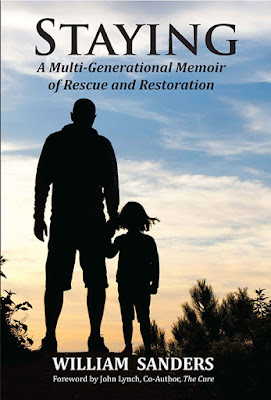 
WILLIAM SANDERS’ memoir of abandonment and abduction is equal parts harrowing and hopeful, suspenseful and satisfying. But the real payoff is how God restored his wounded psyche as He prepared him for his biggest challenge yet.

Staying: A Multi-Generational Memoir of Rescue and Restoration chronicles the events of William’s childhood and adolescence, and the effects those experiences had on him as a father to a little girl who suffered from debilitating anxiety and panic disorder. She needed a father who understood deep hurt and fear. She got one. At the end of each chapter, William asks God for a few words on the events he has recalled. God doesn’t always answer them in the way William would like. But God pours His love out to William in revealing ways.

I have no memory of the events from my first five years of life.

After 40 years of subtly convincing me I didn’t need to know what happened to me as a little boy--mainly by avoiding the conversation completely--Dad changed his mind.

Turns out, all I had to do was ask.

After 40 years of never revisiting the pain we’d all endured, Dad shifted. “Do I like to think about it or talk about it?" my dad said to my sister Cindy on Jan. 6, 2014. “No. But for Bill, I will.” Translation: he’d put aside embarrassment, pride, masculinity, and concern about what others might think for his son.

This is the kind of dad I have. So I suppose I shouldn't be surprised at his willingness to forsake what he thought was best to do what I needed. He did it 40 years ago, and he's done it countless times since.

But what can I say? I’m a slow learner. Maybe a doubter?

Regardless, 24 hours later, I sit in my upstairs den, in the dark of an early winter evening preparing myself to hear the events of my childhood I know next to nothing about. It’s 6 o’clock, and the glare from my computer screen and the outside street light are the only things keeping me from being in total darkness.

Six o’clock means Dad is on his second Scotch of the evening. I had calculated that in advance and decided that one Scotch down and the next one there for the sipping should be just about right for this kind of talk, even though we’d never had this kind of talk.

But my house is too quiet. Jane isn’t home from work yet, and my two daughters are gone too, one rehearsing for her school play, the other out living her life. I’ve never liked the kind of dead silence that lets you hear your heart beating. And mine was beating a little louder than normal.

I turn the television on, which adds some background light but not much. I lower the volume to a couple notches above mute and sit down in my most comfortable chair, rest my feet on the ottoman, and call my dad.

I’m going to try hard to hide the fact that I'm largely undone by the sacrificial love he's showing me here. I hold back because that’s what we do. We respect silence so as to not cause the other pain or worry. This conversation neither of us thought we’d ever have has been decades in the making. So I know downplaying it would be a token gesture that would only add to the discomfort. We both know the immense import of the next hour or so. And what’s more, we know the other one knows as well.

For all of my adult life, three or four times a week, phone calls, usually initiated by Dad, would start with the enthusiastic, “Hey Sport!” as if he hadn’t talked to me in months. It’s a sweet, genuine greeting that I’ve always taken for granted, but hope to never again.

This time though, it’s weighty and serious.

When I began collecting bits of evidence a couple of months earlier, my assumption was that my story would be built around questions, some of which I would learn answers to by digging through records or talking with a few people on the periphery who might still have some recollection of what happened in the early 1970s. I was certain, though, that many questions would remain unanswered.

In fact, up until Dad said yes, up until I’d mustered the courage to ask him, I’d assumed "I don't know and I probably never will," would be the most frequent refrain in this quick story.

Cindy and I had talked about the events of our childhood many times over the years. Almost always, it ended at the void in our knowledge of what really happened. It was frustrating, but we were willing to learn to live with it. Or without it, I suppose.

We didn’t ask questions of my dad for two reasons: First, we’d been brought up to sweep things well under the rug and pretend. The plausible deniability act, putting on a face and smiling, that’s what I knew from as early on as I can remember. So much so, I started believing that this lumpy rug beneath me was fashionable, comfortable and safe, even as it was getting bulkier.

Secondly, we honored our father and that meant honoring his clear desire not to talk about it. He’d earned that right as far as we were concerned. While he had not been a flawless father to either of us, he’d been a heroic one, and an admirable one and a good one. And he still is.

Both of those reasons were sufficient for me and for Cindy for decades.

But I’ve just come out of a horrifying few years dealing with my older daughter’s debilitating anxiety. During that hyper-focused time, worrying about what made me me--and thus what made Rachel Rachel—was impossible.

And now that my life’s state of constant crisis has passed, the slow simmering desire to know my story is now boiling into a full-blown urgency. I’m deciding, for myself and for all of us, the cover-ups are pretending are no longer enough. Too much has happened, too much is roiling inside of me to ignore it any longer. I draw a line in the sand and embrace the belief that whatever the truth is, it will set me free. And Rachel free. And Dad and Cindy as well.

I know my dad will face things that will be difficult to accept. In fact, it’s the only thing that’s giving me a minute’s pause this time and the primary reason I have been silent all this time. I’d be lying if I said it was the only reason though. I knew too that I’d probably learn things that would be easier to not know.

But I wonder: What if the probing and talking could bring us closer through the pain? Would that bring evidence of a radical grace none of us has ever known in such fullness? Could we experience such a thing together? I have to admit, that kind of grace and wonder intrigues me. And maybe the hope of it will spur me on a little bit, when the journey becomes so dark over the eerie months of coming to terms with my story.

As a storytelling journalist for daily newspapers for two decades, I was at my best when I could look my subject in the eye and say: “I will handle your story with care.” Dozens of times over the years, I asked families to share hard, painful truths with me so I could write them for hundreds of thousands of people to read. I’d ask the subjects to be vulnerable, to unzip the chest and bare their soul.

I couldn’t do this early in my career because I didn’t know how to talk that way, and more importantly, I wasn’t sure I could handle their story with the level of care they deserved.

Talking that way, with compassionate confidence, is hard. And it can’t because the compassion and the confidence will ring untrue. You have to mean it, all of it. Many people don’t know how to talk about things that really matter. That, though, is our common burden. As a journalist, it caused me to back away from stories that required seeking, demanding, that level of intimacy for years.

But by the time I reached my pinnacle as a newspaper reporter, I could talk the talk and walk the walk with complete sincerity. And that’s the only reason I can do that now with Cindy’s story and with Dad’s.

Part of me, maybe the noble-striving part, was initially convinced this was going to be Cindy’s story more than mine. She was the one who’d been through the worst, in my mind. But then I thought, no, it was going to be my dad’s story. I’d honor him that way, because whatever’s good in me is there by my father’s blessing, a treasure not every boy can claim.

I convinced myself I could tell this story and keep myself relatively hidden, safe in the background, narrating what was happening all around me. But how could I expect to know the depths of their stories? And wouldn’t that really be me refusing to be vulnerable and calling it a selfless sacrifice?

For the first time—and once and for all­—I would have to lay claim to whatever came during my search and take ownership of it.

This is my story. 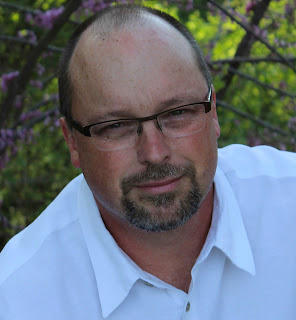 For two decades, Bill Sanders was an award-winning and Pulitzer Prize nominated writer and editor for various daily newspapers including the Atlanta Journal-Constitution. Bill’s specialty was front-page human-interest feature stories. During his newspaper career, he was cited for writing best feature stories, best sports stories and best news stories in Georgia and regionally. He has written magazine stories on PGA golfer Phil Mickelson and baseball great Hank Aaron. His writing style has been called conversational and intimate, and he is known as a dogged reporter. Bill has coached girl’s softball for 11 years considered the softball fields as his primary place of ministry.