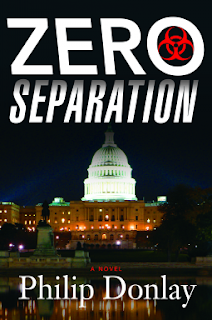 Donovan Nash has a secret he'll do anything to keep. But he's the prime suspect after someone steals a fifty million dollar executive jet, and FBI agent Veronica Montero put him squarely in the crosshairs. As she digs, she discovers Nash's secret -- a revelation that, if made public, would stun the world. Operating on her own agenda, Montero blackmails Nash into helping her hunt down a man she wants dead.

Powerless against the information Montero holds, Nash is forced into a situation far deadlier than either of them could ever have imagined. The man they are after isn't the criminal they expect, he's a terrorist with a plan to use the stolen jet to carry out an unthinkable and devastating act that could plunge America into the most heinous conflict since World War II.

When Nash and Montero are taken prisoner aboard the stolen jet, they will have only one opportunity to execute a daring midair attempt to stop the attack. Success could cost them their own lives, but failure could cost millions of innocent lives.

"In Code Black Phillip Donlay firmly establishes himself as a writer of great thrillers. The first hundred pages are breathtaking. His knowledge of aviation is incredible. Code Black is even better than Category Five. A real winner."-- Steve Thayer, New York Times best-selling author of The Weatherman and Wolf Pass

"Anthrax, countless dead bodies, intrigue, espionage, a hint of terrorists, an angry wife, a plot to die for; and great characters carry the story...Zero Separation is the third of Philip Donlay's novels. I'm looking for more."
BookLoons

"If you are a fan of thrillers, Zero Separation by Philip Donlay is very definitely the book for you. If thrillers aren't usually your cup of tea, this book might change your mind."
BookLoons

"...Zero Separation is intense and action filled as the minutes count down to the imminent attack. Who will live and who will die? Be sure to pick-up Zero Separation when it hits the bookshelves..."
Blooming With Books

"Philip Donlay's Zero Separation is an action-packed thriller that zips down the coast of Florida through a horrendous thunder storm, flies off to a ship in the Caribbean and then whips its way to the jungles of Venezuela at breakneck speed. You'll travel by airplane, helicopter and boat on this whirlwind journey of suspense and surprises. Aviation and computer enthusiasts will enjoy the many technological details. Fans of a good thriller will be spellbound by the action. The characters are expertly developed and the plot incorporates secrets, deceit and lies. There are more acronyms involved in this manhunt than you knew existed in our government. Do not miss reading Zero Separation."
Fresh Fiction

I received a complimentary copy of this book from NetGalley for the purpose of review. The review is my honest opinion and I was not paid for this service.

Zero Separation was a fast-paced edge of your seat thriller that captures the reader's attention from the beginning and keeps it until the very last page. The author has an uncanny ability to create wonderful plots with unexpected twists and turns that definitely help to keep you turning the pages This is one of those books that you just simply cannot put down until you have finished it.  The author is a wonderful, descriptive story-teller with an incredible imagination. The story is so believable that at times you'll forget that you are actually reading a book. While this is not the first book in the series, it is the first book that I have read by this author. The book is written in such a way that it could be successful as a stand-alone as well as part of a series.


I recommend this book to anyone who enjoys a good action-packed thriller and anyone who wants a great read to enjoy. I will definitely be checking out the other books that this author has written.